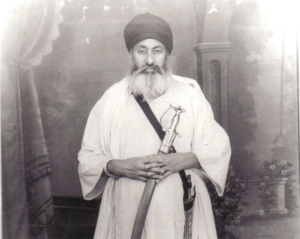 Respected Panthic diamond, treasure-trove of knowledge, Brahamgiani, complete in the practices of the Khalsa, Sant Giani Gurbachan Singh Ji Khalsa Bhindrawale was born on Wednesday 12 February 1902 at Amrit Vela (Ambrosial Hours). Due to the guidance of his paternal uncle at the age of 7 years, Sant Ji was an Akhand Pathi of Sri Guru Granth Sahib Ji.

In 1920 Sant Sundar Singh Ji arrived at Village Akhara on their preaching tour, it was here upon meeting Sant Ji that the young Sant Gurbachan Singh gained the inner peace that he was searching for. The Jaap/mediation of Vaheguru Gurmantar began intrinsically. By listening to the Katha and Kirtan of Sant Sundar Singh Ji, Sant Gurbachan Singh’s heart was finally filled with peace and bliss. It was at this point that he felt he should become a part of the Khalsa Panth and he took Amrit. He became such a true Khalsa that he made his life a continuous penance, such a blissful repetition of Simran began which he enjoyed to his last moments, a non-stop invigorating meditation. Mind, body and wealth were all sacrificed at the feet of the Guru. Sant Ji stayed on the top floor of Sri Harimander Sahib (Amritsar) they meditated on Gurmantar and Moolmantar for 3 months.

In 1921 they went to Bhinder Kalan Gurdwara and met the respected Sant Sundar Singh Ji and humbly asked for the blessing of Braham Vidiya – Knowledge of God. As a jeweler can recognize the value of a gem, in the same manner Sant Sundar Singh Ji recognized the greatness of Sant Gurbachan Singh Ji at this young age (19), he embraced him with affection and kept a watchful eye upon him. He listened to Sant Sundar Singh Ji narrate the Katha of Sri Guru Granth Sahib Ji a total of 4 times and was educated in the following– Bhai Gurdas Jee’s Vaars & Kabit Svayas, Bhai Nand Lal Jee’s writings, Sri Dasam Granth Sahib, Sri Guru Panth Parkash and Sri Gur Bilaas – 6th & 10th Guru. By reading, meditating, listening, accepting and practising Gurbani, the true mystical meanings of Gurbani were realised by him. He read 125,000 Japji Sahib’s and performed 360,000 meditations of Mool Mantar and countless meditations of Vaheguru simran were performed during this period. 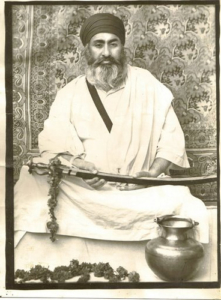 aspects of Gurmat and initiating others into the Khalsa Panth were the foremost aims of Khalsa Ji. On many occasions they would walk many miles along with the Jatha Singhs. Punjab, Kashmir, Peshawar, Benares, Patna Sahib, Jagannath Puri, Rameshwaran, Sri Hazur Sahib, Calcutta, Bombay were all visited and Parchar done. In India there are only a few areas/cities where Khalsa Jee did not visit in their life, to grow the tree of the Sikh Nation and bless people with Amrit/initiation into the Khalsa Panth. Khalsa Jee’s dedication to Khalsa discipline and promotion of solely Gurmat was truly a heart-felt passion.

Just as a lotus flower stays detached/floating along water, in the same manner Khalsa Ji was forever detached from Maya (worldly illusion). Thousands were initiated into the Sikh-fold being enlightened by Khalsa Ji, thousands were taught the correct pronunciations of Gurbani and countless Gianis were moulded. In literature Khalsa Ji has immensely contributed by writing various tracts/pothis about Gurbani and Sikh History and Sikh discipline. He did the construction seva of many Gurdwaras. His katha was so inspirational that if one heard it the once, they never forgot it and they would listen to it repeatedly to further their lifestyle to higher morality and spirituality. Sant Ji completed 27 Kathas of Sri Guru Granth Sahib Ji in their lifetime. Giaan Kirna – ‘Rays of Divine Wisdom’ is the biography of this great Saint, originally authored in Gurmukhi by Giani Pritam Singh Ji Likhari, who studied twelve years under the tutelage of Sant Ji. Jivanpal Singh, a student of Giani Pritam Singh Ji, has translated the original work into English so the current generation can gain inspiration from Sant Ji’s life.